OF THE ŠABAC SWIM MARATHON

HISTORY OF THE ŠABAC SWIM MARATHON

The swimming marathon ,,Jarak-Šabac,, is known worldwide as ,,THE RACE OF PEACE,,.
In the Calendar of the World Swimming Association it has been placed since 1984 and it occupies 7th place among 24 most popular swimming marathons.
When ranking on this high position, the International Committee has taken into account: the number and quality of the contestants,security of the track race,reception swimmers,accommodation and nutrition of the swimmers,organization of the competition,the number of audience,prizes,awards and overall impression from the swimmers--marathoners of theirs hospitality in city of Šabac.
The International swimming marathon on the river Sava is 19 km long,which is the length of the water section between the Srem's village Jarak to Šabac's beach ,,Stari Grad,,.
The Marathon is held in memory of ,,The Blood March,,.
In the autumn of 1941, about 4000 people from Šabac ran 22 km to the German concentration camp in Jarak village under the death treat penalty.
Anyone who stumbled on this road was murdered. Many from ,,the running death line,,survived thanks to the people fro Jarak,who risking theirs lives gave them water and food.
As a sign of gratitude,people from Šabac built a memorial fountain at the beginning of this village. They wrote ,,For love brotherhood and water,, on it.
The pioneer of this Competition, which entered the international swimming marathon,Mr Milorad Rajšić ,persistently and with a help of town's sport enthusiasts ,gives a new lease of life to this Marathon, in which every year, first weekend in August ,in the embrace of the river Sava ,swimmers from all continents find themselves.

THE MARATHON THROUGH YEARS

Everything started almost by chance, In 1970,a group of young men from Šabac compited in swimming on the river Sava beach.This competition was noticed by the students of,,County Students Club of Šabac,,. By 1971 ,they organized a competition. On foreigner ,a Dutch, Mr Ate Sikes Frans ,also took part. The symbolic taking part of one foreigner
in the very beginning of the Marathon, left mark for the Marathon on the river Sava to become an international one.Years passed and Marathon became bigger and bigger ,and gained appreciation.Every August ,the river Sava boiled under the strokes of the swimmers from Yugoslavia and World. The track on which Marathon takes place from the Srem's village Jarak to Šabac is 18,8km long. This track length which marathoners swim on from 1982 is crucial for the development of the Marathon.The Marathon was beyond the local scope and by 1983 it received its significance. Therefore,we can look at the Marathon through 2 periods ,i.e. 2 stages of its development. First period , from 1970 to 1981 when it had its local  significance (when the contestants were people from Šabac in loved with the River Sava) and second one, from 1976 to present, when the trained swimmers from The swimming club ,,Zorka,, took part also. In 1976, the newly -built pool was built in The Sports Centre ,,Zorka,,and the swimming club was established immediately after.
In 1970 the first Marathon did not have any organization. Not even the press wrote about this sport happening.The river Sava was the only witness to this first competition.
Six young men swam in the heat of July and thought how to turn this fun into sport chiavalry. It was a competition without judges and official presentation. They determined the start from the Klenak's river islet and swam across the river Sava to the beach of Old Town. Next two years ,,The County Students Club,, organized ,,The Days of Water,,, and one of the most attractive disciplines was the swimming marathon.The track was lenghtened. The start was at the railway bridge from the Klenak's side all way to the Old town beach.
The track length was 2,5 km. Next 3 years ,besides the the County club ,SOFK Šabac also took part in Organization. The track was lengthened again.Now the start was from the Koča's  Channel ,so the length was 4,5 km. And the number of contestants rose from year to year. In 1976 ,at the suggestion of the swimmers,two races were organized. The first one,same as the previous year, from Koča's Channel ,and the second one, 8km in length ,from Drenovac village river islet. Swimmers from Šabac,all experienced marathoners ,wanted to challenge their swimming stamina and courage on longer distance. In 1977 ,they swam from the archeological site ,,Gomolava,,. , This track was 16km long.Next
4 years ,this was the official track.The County Students Club was in charge of the Organization till 1978. In 1979,for the first time ,as one of the organisers was The Youth Centre ,,Vera Blagojević,,.From then on ,the Šabac marathon rise up. From year to year,the organisation became better and better,and the interest for Marathon rose. In 1982,the swimming marathon was not only a marathon for the swimmers from Šabac. Swimmers from other parts of Yugoslavia country was registered. The next period of development came.
The Marathon became international. From 1983 to 1990 it gained more significance, not only as a sport race ,but also as a memorial race,,THE PEACE RACE,,.In 1982,the traditional marathon Jarak to Šabac became a friendship marathon ,not only, because many countries participated,but also it gained approval of people from Šabac and Jarak.
The organisers decided to lengthen the track from the Srem's village Jarak to the beach ,,Stari Grad,,in Šabac. It was18800meters long. From that time ,it had a new name ,,THE PEACE RACE,,(the memorial marathon) in memory of ,,The Bloody March,,,when 4000 people from Šabac were forced by the German fascists to run 22 km to the village Jarak under the death treat on September 26th,1941. In 1987, The Municipal Tourist Organization took charge for the organisation.The sanctions were imposed on and the new war broke out.
The Marathon was still on. The goal of the Organizers is to keep the tradition. During those 4 years , from 1991 to 1994, the track was from the Koča's Channel to Drenovac village, river islet as it was in the very beginning. The contestants were mostly swimmers from Šabac and few quests. The war was over. The organiser ,The Tourist office or Organisation of Šabac Municipality wanted to bring back the old glory to the Marathon. Next 4 years , they brought many famous names from the marathon swimming sport : Poland,Czech Republic, Slovenia,Macedonia,Egypt,Italy, Hungary, France,Holland,Argentina,Brasil,Great Britain,USA,Canada etc...In 2004 , the Šabac marathon entered in FINA WORLD CUP GRAND PRIX OPEN WATER SWIMMING.  The prize money was 12000 dollars and the length was extended to 19km. The world's strongest swimmers-marathoners entered.
Also ,many sports and cultural manifestations were held, as well as the other competitions. The Šabac's marathon has entered in Calendar of FINA OPEN WATER  GRAND PRIX races since 2004. The Marathon and Šabac became well known,  not only in Serbia , but abroad as well.   WORLD IN ŠABAC - ŠABAC IS WORLD.
It is expected that The Tourist Organisation of Šabac Municipality as well as the Patrons of the Marathon ,city Sremska Mitrovica and Šabac ,will guard and cherish this beautiful manifestation and tradition recognize all over the World.
WELCOME TO ŠABAC WELCOME TO SERBIA ! 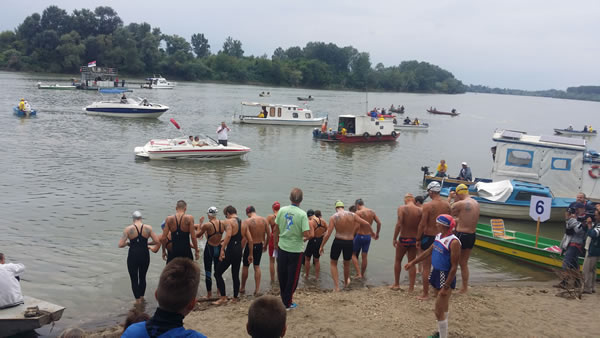 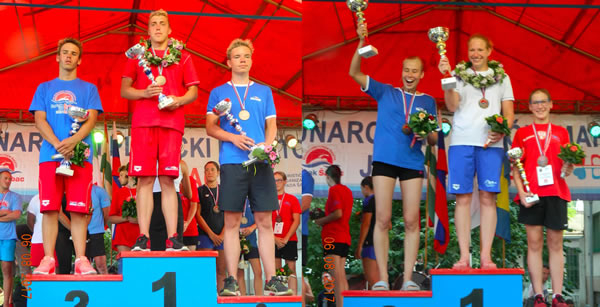